So I just rewatched Star Trek Into Darkness, and now I'm pining for a new Star Trek show.

I mentioned this on Twitter, and DaddyDM and I came up with a flurry of ideas. Now we just need a producer who can secure us the rights. I'll film on my S4.

I think my favorite idea was a TV show focused around Academy Cadets. It could feature a rotating cast of cadets, with a stable cast of instructors. We were introduced to Red Squad in DS9, which is a possiblity as well.

Another good idea was expanding the Vulcan/Romulan conflict. As we know the Vulcans have settled onto a planet we know as Vulcan II, why would the Romulans not use this opportunity to take them out for good?

What ideas do you have? 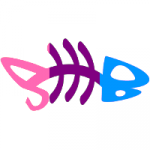 I was never a die hard Star Trek fan growing up but I love the new movies! They really injected a ton of new life into the franchise.

Cadets could be fun. I think id like to see something with people on the fringes of starfleet.