I am trying out a setting using my Dicechucker rules and am seeking players. Dicechucker is not your normal rules. They incorporate alot of meta game stuff. I am also trying out some mechanic alterations to the rules.
Rules are free and are at w00tgames.wordpress.com/downloads.
I am always willing to help out new players in character building of you have a character idea in mind
The setting is developing...but I am droppong them right into the thick of it. See the premise below

The Premise
Its fine weather in Eldmond for Highsun festival that celebrates the summer solstice. The celebration lasts for days and many folks through out the Meld come to sell their wares or just participate in the merriment. Being at the epicenter of human, dwarf and elf realms males the Meld and Eldmonde very prosperous.
People fill the town square. Banners stream from building to building. Wreaths of flowers and other ornamention festton door and window to mark the day. Carts dot the square and attract celebrants with shiny goods amd treats.
A roped area to keep celebrants clear contains some brightly uniformed trumpeters and some unknown festivilly attired dignitaries closely watching a sundial. When tue sun reaches its zenith the trumpets will blare and the real merriment will begin.
The warm sun is momentarily blocked by a passing cloud. Then another and another. Finally the sky is filled with clouds. Few notice pther than the dignitaries. Who alternate between strained scrutinizing of the sundial and annoyed glances at the changing weather. A cool breeze blows. Then the strangeness happens. First one, then two, the a light flurry of tiny dancing snowflakes. Slow the gathered crowd begins to fall silent and take notice. Quizzical expressions abound. Someone calls out,"Its a wizard's jest...Good show!" He is met with a fee uncomfortable laughs that trail into uncertainty. The flurry grows steadier. And a powder coat first dampens each surface them a spft white begins to highlight everything.
The air grows chillier people begim to murmur and many begin to take their leave. A dignotary calls out "Please good folk surly this is some errant cloud from the southern mountains it will pa....The air fills with something like a hum...mot heard but felt. The taste of metal is in your mouth and suddenly and violently the ground quakes. Not a pscillating shaking but a hard shove in one direction, as if some unseen force pulled the ground from under your feet. Most everyone fell. Not only people by the instantaneously powerful movement toppled objects. Around you several stones where jarred loose from structures. The sounds of buildings creaking and cracking. Some second stories and rooves crashing down. Some whole building. Distant trees can be heard falling. All mingled with screams and cries of distress. Snow fall and dust fill the air. A ringing fills your ears and looking around you are not the only one experiencing it. The ringing grows louder amd more persistent. Finally it gives way to a tremendpus crack and flash of blinding yellowish green.
As vision returns to normal a panic begins to ripple through the crowd. In the middle of the square stands two large horrible creatures the likes of which are unnatural. One some cross pf a draconic nature and a chicken The other a giant lumbering thing with the lower half of a great stag and upper of a blubberous ogre with antlers. They seemed dazed for a moment but then as the crowd panics and starts to move, the strange creatures surge into an attack!
Last edited December 5, 2021 12:12 pm 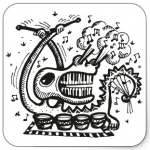 Hi Storyweaver, I quickly scanned the rulebook. Looks interesting! I think it could make for some creative RP.
If I understand it correctly, your character sheet can basically contain anything you feel like (as long as it makes sense, of course). I like that idea a lot.

The Power Dice and Meta actions are a bit much to grasp by just a quick scan. But I never mind a bit of surprising chaos being thrown at my character.

I'm up for joining this adventure, if you're still looking to start it. :)

I am glad you are interested..the rules are definately much more about playing around a real table than pbp but I dpnt do much actually table top play anymore. I will adapt the rules to work here and drop some of the meta game involvment completely for this. I would hope for at least one more player more would be great but we will see what we can do with what ever I shall send you am invitation.
Mark as unread