I'm making a horror homebrew rpg for fun, and wanted to get some ideas for how to handle penalties/injuires. I'm not going to describe the entire thing, just what's relevant.

So the rpg's premise is that sleeping kills you, and you, with other characters, are trying to stay awake, while fighting off the horrors.

The two things I want to hear suggestions on the most is a system for the character to be impeded by injuries, and a system to resolve those injuries.

To help with the first point, the current action resolution is by rolling dice pools, sized from 1d6 to 5d6, depending on the stat used in the action. If you get any sixes, then the action succeeds. I will adjust this eventually, since the probablity of success is pretty low as it stands right now.
Last edited November 19, 2019 11:46 pm, a total of 2 times

Some clarifications I thought of:

The game is probably the length of a one shot game. It takes place over one night.

I'm thinking of having PC elimination as part of the theme, but I'll have to work on the exact mechanics for that.

Interesting... Not sure how the PCs work exactly but, first thing that comes to mind would be to have injuries having both healable and permanent effects, so you get the PC progressively weaker as the game goes on. Gives it a survival horror feel :)

Let's say a player tried to jump and fell, breaking a leg. Said player gets -1 rank to run and jump skills and -1 to the dexterity modifier. If they mange to treat the broken leg in some suitable manner, the player can recover the dexterity modifier, but the residual damage from the broken bones will still reduce specific skills such that running and jumping. This means that, the general effect (all dex skills) is mitigated, but specific actions with have decreases chances from then on. You may even consider the other side of the coin, if untreated, it may infect or the pain may become unbearable, leading to CON or WIS penalties piling up.

However, I'm basing this ideas on common dnd-type character. With the resolution you mention, you may not be considering skills and abilities separately.

I'm reminded of the L5R wounds system where each wound threshold represents a different level of pain and/or shock which makes all actions more difficult. Newer systems have used a net modifiers to Target Numbers, but the original system used to remove dice from your dice pool.

Now I don't know how much health your average character will have, nor how many they're expected to lose on an average hit, but making various brackets with increasing penalties, eventually leading to a K.O./death could work.

Maybe something along the lines of... 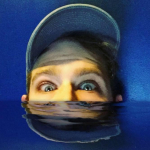 The conditions with stacking penalties as Kalajel outlined is pretty graceful, but couple with your basic mechanic is going to produce a brutally low ROS if the dice pool is capped at 5 (that's a 60% maximum chance success rate).

60% doesn't seem terrible, but remember, that's under absolute ideal conditions for the player - rolling their highest stat possible with no penalties. If penalty conditions stack, then it will be a quick spiral of destruction. Maybe this is what you're looking for in a survival horror game - that sense of futility. Perhaps you lean into it and build the game around the assumption that the players will fail their most, if not all, of their roles. As long as you have player buy-in, I could see failing every roll in a survival horror game being totally appropriate.

This whole mechanic, including the idea of conditions that incur penalties, is very similar to the system that Free League Publishing uses. Are you pulling inspiration from any of their games, out of curiosity?

OOC:
This is an important point. Those are pretty terrible success chances. They can work if rolling in itself is already a failure state, as in, if players have to roll, they did something wrong.
In a horror game, maybe they only roll if in direct opposition with the monster and success or failure in non-opposed challenges is not determined through rolls.

I do realize that's not the point of the thread, though. But I wanted to mention it as well

Atomic Highway has an excellent solution for that. First, 6s are open-ended, which mean that each 6 rolled naturally allows for possibly more successes. Second, each skill rank is a point that can be used to potentially artificially bump the result of other dice which did not rolled at least one 6 to a 6 (and of course, those 6s are not rerolled).

Yeah, that resolution mechanism is just a protoype, it's just there to show in general how the resolution is made with a dice pool. I'm definitely going to adjust that so there's a fair bit of tension, but not like, hopeless.

I've thought about rerolling a dice that come up as ones, which end up making the distribution a bit better, but it's still a bit dire, with a 67.3% chance of success with a rank 5 skill. I'm also thinking of having the player have an option to reroll the entire dice pool, but at a cost to their "fatigue" (the health system used in the game). I didn't think about that point boosting system, I'm interested to hear more about how it works.

Anyways, back to injuries, since the health system doesn't translate to physical health, I think that it would be more or less separate from that system. One thing that I was thinking about was, if you get too many injuries, you die. You can remove that count by taking actions to mitigate them. Maybe it's like 3 strikes, you're out. I imagine that it would help keep the characters on their toes, and force them into a more cautious approach instead of just trying to beat everything up.

I'm still unsure about how to have those injuries affect the character's abilties. One person I asked just said to remove a die from the relevant dice pool. I guess it's simple and intuitive, but it doesn't really have that flavor. Another said to roll with disadvantage whenever the injury is relevant to an action. If either of those dice pools lack a 6, no success. I haven't calculated the probablity for that option yet.

Maybe instead of lowering the (already low) success chances, you could add additional downsides to the roll.
For each injury that would apply to this type of roll, a character rolls an additional D6 (in a different color or a separate location). If it comes up a 1, something bad happens in addition to the success/failure of the roll.

Interesting way of looking at it. You mean like, a complication of sorts, right?

That's actually super interesting, Spinach: What if, instead of reducing the dice pool, each condition increased the chance of "fumbling" and inflicting a complication?

A couple ways to consider using a separate "complications" pool:

One, each condition adds a die to it, and a single 1 results in a complication (similarly to how a single 6 results in a success).

Alternately, there's a single "complications" die that you roll with every skill/stat/whatever test. Every condition you take raises the complication threshold by 1 - so with 1 condition, you get a complication on a 1. 2 conditions, you fumble on a 1 or a 2, and so on up to 4 max conditions before you die.

Idk what the mechanical ramifications of that would be, but it would be elegant to implement.

I think the complications things got potential. Still open to other ideas as well. For example, I've also thought of using something along the lines of Fate rules for consequences, where the injury comes into play whenever it's relevant. However, in Fate, the player gets compensated for that, so that's a major difference.

(Thinking outside the box here)
If this game is played in person, what if you rolled onto a 9-, 16-, or 25- gridded area. At the start (no fatigue), all of the grids are available, but later on, as fatigue/injury sets in, you cross off or fill in grids. Now, any dice that land in these filled in grids are considered failures, regardless of the roll. Players could maybe have some agency about deciding which grids to fill in (or maybe not?)

Along the same lines, maybe you combined dice rolls with cards that are drawn -- a bit like the Gloomhaven mechanic -- where fatigue adds bad modifiers to the deck.

That's a cool idea. Might be annoying or not that useful in practice or even cause problems (I can see players focusing a lot on rolling into the right areas which might make their rolls less roll-y and more drop-y).
But it's a fun idea that would have to be tested
Last edited November 20, 2019 8:37 pm, a total of 1 time

In my experience, you can generally control where the dice land when you throw them, especially if they're less rolly dice like d6s. But I do like your thinking out of the box, and it's a pretty cool idea.

I found another dice resolution system that could be interesting, has a higher chance of success. Kind of steps on the toes of the complications idea though.

saevikas says:
In my experience, you can generally control where the dice land when you throw them, especially if they're less rolly dice like d6s. But I do like your thinking out of the box, and it's a pretty cool idea.

I agree, but you even gamify the rolling system: i.e. non-dominant hand, blindfolded, etc. to match in-game mechanics. Might be fun with younger players, as an example.

In all seriousness, something like that could be pretty fun as a party game. However, I was planning on making the system more serious than that. I may make a variant version later though, the idea is very charming.

I got to thinking about this idea from Betrayal: there's a mechanic in one of the chapter in which you stack the dice and tip them over. If they fall into a space where characters are located, they do damage.
1 of 2
1 2 >