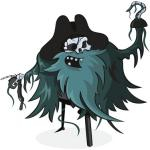 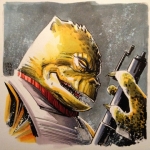 After being cut loose from his psy-bro, Chuck used his skills at espionage, sabotage and various other nefarious -age words to try to make a buck in Voidspace. Primarily relying on his wit and charms, his mouth often writes cheques his ass has trouble cashing.
Last edited September 4, 2015 5:02 pm, a total of 5 times

HAHA, totally busted! That said, Sam Axe is a pretty inspiring face/fixer type. I love his character in that show.

Yep, great show and totally GREAT character, I really like your choice :)

Survival (I) - The character wanders the wilderness and thus gains knowledge regarding tracking, hunting or finding his way. He gains a +2 bonus per talent rank to all checks regarding the above. He may effortlessly gather one meal per talent rank by finding fruits or hunting small prey. Three such meals count as a daily ration.

Weapons:
Hunting Knife (+1WB, Parry: The weapon can be used with the parry talent.)
Rifle (+3RA, -4OD, Knockdown: If target fails the defense check, it falls backward 1m and is knocked to the ground unless it is 3m or taller.

Tchok Brawn grew up on a desolate, warblasted planet out in voidspace. His father, a stout and heavy-handed man, was the owner of a crappy little cantina that watered pirates, slavers, and other scum; and specialized in helping anyone with enough credits stay invisible to the prying eyes of The Empire or anyone else looking for them. Naturally, Tchok received no formal education, and can barely read his own name, but began working at a young age for his father. He would do anything from sweeping floors and scrubbing commodes to tossing out rowdy patrons. Tchok typically spent the little free time he managed to squirrel away from his father's shadow, practicing at a local grappling club, wrestling being a widely popular sport on his planet.

When Tchok became 10 years of age, he won a fairly prestigious wrestling match, which drew his father's attention, and his father did his fatherly duty and saw to it that his son begin learning a trade. He did this by sending his son out into the alley behind the cantina to fight other patrons while supporting his "education" by placing bets either on his own son, or depending on how sober the other guy was, sometimes the other guy. Tchok was also frequently dispatched to collect debts that were owed his father, or to persuade an advance payment. These collection trips frequently took days or weeks to find the people his father was helping disappear, and Tchok learned a bit about how to live off the land.

Lately though, Tchok's grown tired of working for his father and has set off on his own. He has very little by way of marketable skills unless he finds an employer needing to hire a set of hard fists, and assumes his best chance of getting off the dustbin of a planet he calls home will be in the capacity of hammering skulls or protection.

Tchok is a man of very few words, mostly because he only knows a very few words. He prefers to keep his mouth shut and let his fists negotiate for and him and has very few scruples about taking orders. He is often seen accompanied by a large white dog, whom Tchok refers to as "Soopy" or "Suple", an homage to Tchok's grappling upbringing.
Last edited February 12, 2016 7:06 pm, a total of 3 times

Perhaps Dex should note somewhere the 2 missiles and 1 torpeedo purchased so far (hopefully more once tea drops by...).
2 of 2
< 1 2