Once more, the name of the thread says it all.

Please do not post to this Thread until I have started the ball rolling. Thanks. :)

I've got four PMs so far with Character Concepts to look at, and will get back to that stuff later today. Sunday afternoon is a gaming day for me, so it will have to wait until this evening.

What I want to address here is something else for the moment.

For those who are considering creating player characters that are not native to the present day (approx. 2007), there are certain things you need to consider.

First off, if you're going to play a character from the past, you'll need to figure out how the character is going to fit with the modern-day characters, and what his/her purpose will be in the ARC and why they would have accepted this person who is suffering from culture shock. (And we're not even going to think of player characters from the future.)

Which leads us to the second element, the issue of culture shock. You're going to have to go on the assumption here that your character has been in the present day long enough to get familiar with the appearance of modern technology, if not the basic operation of said technology, and has learned some language skills as well. Travelling through the Anomaly doesn't give you automatic language skills and the like. Needless to say, this will mean taking the Knowledge (Language - English) Skill, possibly the Technically Inept Bad Trait, and the Time Shifted (Minor) Trait as well.

If you choose not to have the character having been in the modern day for some time to acclimate, then that's fine. But remember, the player character in question shouldn't steal every scene and dominate every adventure through sheer weirdness and the fact that they're different. That's just not fun for everyone else playing in the game.

There are other things to consider when taking a character from a different time period, but I'll discuss that with each player considering taking an out-of-time character in the various PMs and the like.

If folks have any thoughts, questions, comments, etc. about this whole matter, we can discuss it here. :) 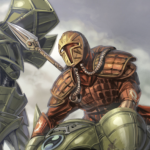 I'll be playing an expert big game hunter and guide, working with ARC to track down the ultimate big game. I'm thinking he'll be comedian to someone else's straight man, and probably be a bit loony to boot. Not that ARC agents are normal by any definition.

I'll be playing Bryn Prothero. He is an adopted troubled punk seventeen year old with a stutter who as a free runner has become determined to succeed as an athlete at the Olympics in London in 2012. At game start he is independent of both the ARK and the Chronos society. 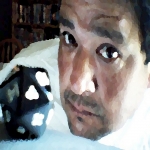 My character is Aldous "Jon" St. John, a homeless veteran who came back from a conflict over a decade ago. He tried to adjust to civilian life but fell through the cracks. He's been living on the streets for a while now. He doesn't know what ARC is and at the moment doesn't care one way or the other.

My character is Dr. Henry Anders is a medical doctor and avid student of botany, who enjoys hiking in the woods to find specimens for his herbalism hobby.

I'll be playing James T. Raiden, an ARC scientist tasked with the study of Anomalies. In addition to being very serious about his work, he is also an avid martial artist.

Elsy Balthasar is a mathematical engineer, and is a former lieutenant in the Unité Spéciale de la Police unit (counter terrorism) of the Grand Ducal Police of Luxembourg. She joined ARC as a scientific investigator after experiencing an anomaly while on holiday outside of London, at which ARC had also responded, and became curious about the scientific explanation, but she is nosy and is becoming known for meddling in things she shouldn't.

Yep, time for Step 2, Character Background and History. It's already up and waiting for folks in the Character Generation thead. (And I've sent folks the file for this that needs to be done up.) So just waiting for files/messages from players with the write-ups on Character B & H. :)

Just a couple of other thoughts about this step in Character Generation.

In my personal view, you cannot undertake this Step of Character Generation in a void, per se. That is to say, there should be some give and take among you as players when creating the Character History and Personality. Towards this goal, I want to encourage you to talk here in this thread about connections, links, and some of the possible interaction(s) that you see between your characters, and possibly how you want to relate and interact with the Name characters from the PRIMEVAL tv series (if you're actually a part of the ARC). Please use a Subject Header of "Interaction with the ARC and Others" for this subject, okay? Thanks. :)

Bear in mind here that we're talking more about Personality and History and other roleplaying elements, rather than game mechanics and skill sets. Some discussion of that should occur, possibly, as relates to how you're all going to "fit in" with the various roles that are possible for characters, but this really should be more about the roleplaying aspects of this subject, okay? At least for the moment, please.

If you have any questions on this matter, please don't hesitate to ask, and any comments and thoughts are also welcome. :)

Anyway, let's get to Character Histories and Personalities. Looking forward to what everyone comes up with. :)

Okay, effective this morning, I have three players with complete and approved Character Background and History for their player characters. They're going on to doing up their Primeval RPG game statistics.

I'm still waiting on the Character B & H from the other four players for the game. Hopefully, they'll be sending me theirs for approval sometime within the next few days. Assuming folks want to get to the actual play of game, sooner rather than later. :)

Just thought I should let folks know that Qralloq has dropped out of the game, due to being involved with too many PbP games.

Therefore, Elsy Balthasar is no longer a player character.

Sorry to hear that. I really liked Elsy's concept. We'll miss you Qralloq!

Mine is coming along, just haven't had much time to work on the write up and get it submitted. Should get it soon JohnK, another day or so perhaps?

I made my character's interested and career in such a way that she could easily get involved without actually knowing any of your characters. Oh no an anomaly opened up in the woods somewhere where Gwyn happened to be hiking and taking nature photos. Perhaps she can be our first "victim." Anyway just an easy way in for her. A pity we lost an ARC character though.

Does Gwyn work for a newspaper (i.e. Papparazzi) or is he more of a wedding photographer?