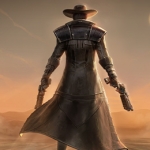 Mack shoulders Breecha to help him keep his balance, uncertain how well his gyroscopics work in Safe Mode. "Watch the stairs there, buddy." Mack mutters, easing the warforged down the stairs and past the bar towards the van. "Time to make ourselves scarce." Should Kessel and Preserver seem to be taking their time, Mack will dart back in to assist... otherwise, he'll get into the driver's seat and warm up the van.

Kessel uses the repair kit on Preserver to regain some rudimentary function, then he helps the bot on its feet. "Easy there, buddy." On the way out he picks up an SMG (or two if he can manage it). The two make their way to their van outside.

As you get both of the bots loaded I to the van and start pulling away a portion of the flaming building collapses as you start to hear the wail of sirens in the distance. You drive away from another successful mission. Another day on the job. After you get back to headquarters Tymora chastises you about keeping the bot's in working order as she fixes them to full operating capacity.

You also seem to have all learned a good deal from the experience.

700xp each for a well earned second level and then some. 300 gc is also transferred to your group account by whoever hired you for the job. No name was given.

Mack fusses over the bots and Tymora, while she works on them and chastises Mack all the while. "Yes, yes." he mutters from time to time. And, "It's not my fault!" Once they are back in a semblance of working order they each get a hearty claps on the backs of their chassis.

Mack also finds an opportunity to suggest, "Maybe we should spend some of those GC on potions or autofixkits."

Breecha remains plugged into the mainframe as diagnostic programs run through regression tests to ensure things are operating adequately. His red optics are bright as he replays the last mission to preserve the team's tactical qualities and, perhaps, consider what they could have done differently and achieve the same form of success.

One of the system daemons finds a null pointer exception in Breecha's self-preservation software. Seems this bug prevented Breecha from successfully using the backup failsafes when outer components received damage, which could have enabled the mech to continue fighting for a bit longer. A monitor next to Breecha signals this, calling for attention to remedy a patch.

Preserver sits upright on the table. "What happened? Did we succeed? It would appear so as our account has been credited the appropriate amount...RESTART IN PROGRESS." The bot shuts down and slumps in his sitting position. A moment later he springs back to life and leaps from the slab he was on detaching the wires that were monitoring his repair. His entire frame spasms and his plating pops and flexes over biosynthe muscles.
"Bio printers online and functional. Adaptive camouflage mode now available."

Mack flashes a smile and a thumbs up to Preserver. "Good to have you back in action." He spends a good portion of his day with several different kinds of books open, pouring through the arcana as he figures out where he'd like to spend more of his time and attention. "I'm thinking evocation since.. really, it's all about shooting things..." But he's undecided for now. 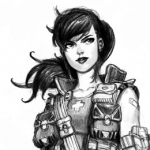 Tymora kind of gathers you all up later after the bots are brought back to working order and have had systems upgrades run.

I know Mack had mentioned we need some supplies. We are running low on repair kits, we have next to nothing for ammo. Honestly at this rate we were lucky you didn't total the van on that last one. Some healing stims would be useful for everyone. Unfortunately, after that last... job... we may need to lay low and stay away from more legitimate shops. Surveillance may be keeping an eye out for you guys. I've been hearing the news reports of the club in the slums that burned down, she says as she flips on a vid screen in the shop. Running news reports are already showing footage of the club completely engulfed in flames, and mostly crumbled. It looks as though a bakery next door may be at risk of going up as well.

So, I've arranged a meeting with an old... let's call him acquaintance. He is head of a substantial black market and may be able to get us supplies on the cheap. We go back a ways. The only downside is..., she pauses trying to find the right words, ...he is a cambion. I mean at this point I don't know if we can be picky. I mean you just blew up a club for 300 GCs. I'm going to try and scrounge up so more work for us through some boards I know. Can you guys pick up the supplies?, she asks as she holds out a small scrap of paper with an address written on it. It appears to be down in Skullport, the docks district.

A Cambion, as most of your characters will undoubtably know, are half-human half demon spawn creatures. Where once they wished only death and destruction, now they have joined the modern way of thinking and seek cash, favor, and power through the chaos of illegal activities and extortion. You can trust them about as far as your money would allow you to throw them, but the certainly are well connected and great at acquiring things you may not find elsewhere.

We really need to work on your linguistic processors, buddy. Looks like the guys known as Daemon, which frankly feels a bit on the nose for being part demon. Shouldn't an alias be more, clever? Anyway, sending an image to your datapad. This is the guy. I'll see if I can find an unsecured feed but you know me, buddy. I'm a pacifist. I'll see if maybe I can get some layouts from my insecure port friend down at city hall, the AI remarks, then goes dormant as its processors search.

"The question I have is about our vehicle. Did the authorities I.D. it? Can we even get to Skullport without drawing unwanted attention?

Scanning records hasn't shown any mention of a vehicle make or model as of yet. I can't however say with any certainty. Alternate options would be public transport, or walking. Despite your resilience against death, I would avoid the last one if possible.

"Divert Attention By Moving In Plain Sight," says Breecha. "Location Is Shipping Port; Many Vehicles Traverse Access. Drive Personnel Carrier As Though We Are Supposed To Be There, Making A Delivery."

Breecha's optics scan his weapons, then does a self-diagnostic. He touches a hand to his chest. "Disguise Self As Labor; Leaving Combat Ordnance And Armor At Headquarters." His mace, of course, is coming along for this job.

"Let me reach out to my contacts. If he can put in a good word for us in addition to Tymora's then this Daemon might be more helpful towards us."

Background Feature - Criminal Contact: You have a reliable and trustworthy contact who acts as your liaison to a network of other criminals.

[Handing a note to Kessel]

Kessel looks up from his datapad. "Alright, my guy says he'll put in a good word for us. We'll have that in addition to Tymora's endorsment. My contact confirms the address is an old shipping warehouse dockside." Kessel pauses, "I don't know about going in without ordnance, Breecha. If for nothing else, it might be good to have firearms to surrender at the door as a sign of good faith? What do you think, Mack? Tymora?"

Tymora looks back at the vidscreen still showing the chaos at the club on the news. She then turns it off, Either way just... Be subtle please. with that she turns to go back to her office/workshop in the back of the safe house.

Breecha nods and begins to reload his weapons with loud-and-not-so-subtle clicks, clacks, and snaps.

"Since we aren't going in looking for a fight, it shouldn't be a problem for us to keep this quiet."

::Sorry, couldn't resist the opportunity to get some "famous last words" in there. Not that I intend to cause problems, but this is D&D.::

Alright, I'm going to cut this thread here, with some famous last words. Feel free to use the OOC thread to discuss more strategy going in, and I'll have a new post up for the next chapter hopefully tonight. May need to get some more box character sheets made. :)
9 of 9
<< First < 7 8 9