The man in burgundy shoots one rueful glance back at the holy house when Felor mentions the gods and accepts his condolences with a grimace.

You are all free to leave Alband now, and this chapter will end once the party decides on its next destination. You could hang around here, but I wouldn't recommend it.

1. Continue north, on horse, to the orcish fortress where Gorham is supposedly hiding out with Martjan. You've lost Aeron's relief map, but several of you got a good enough look at it that you could conceivably find your way there.

2. Backtrack to the crossroads and head to Solyhill, where Gethro is investigating the dragon (?) attack that killed the Hazard Army cohort.

3. Head east to Sthombo to scout out the place where the Iron Sphere may be hidden, to see if Gorham really found it or not.

You could also head back to Hazard to search for clues there, venture down to the Gaad/Gurmar region to look for Zora, or come up with some other brilliant plan. Whatever you choose, Annganne will meet up with you when chapter 7 begins. What do you think, party?

I vote Solyhill. Have we communicated with Gethro at all since we left for Vorch?

No, you've only talked to his colleagues at the Hierophant's office. 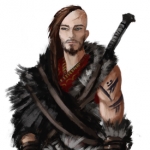 Zangua checks to see if any rope can be salvaged, then wordlessly follows the others. He brings up the rear in case any of the strangers have a sense of bravado.
Last edited January 28, 2019 10:14 pm, a total of 1 time

Mordred would, I think, be eager to get back to Sthombo, where he feels comfortable and understands the power structure and his place in it. He would suggest that if Gorham doesn't have the Sphere, then chasing all these other leads might be giving him just the time he needs.
Last edited January 28, 2019 10:14 pm, a total of 1 time

I was going to say go to Sthombo to find the Iron Sphere, but either Gorham did find it already (in which case going there is pointless), or he didn't (in which case we might be leading him there if he's following us).
Last edited January 28, 2019 10:29 pm, a total of 1 time

I kinda feel the same way; we may just end up leading him to the sphere. We've based our actions on a lot of hearsay lately and if we can talk to Gethro maybe we can find out for sure what happened and how much truth we've been getting from the 6PC and then make a more educated decision. There is certainly the risk of giving Gorham more time though.
Last edited January 28, 2019 10:50 pm, a total of 1 time

Just want to suggest that this conversation happen inside a Leomund's Tiny Hut; I am not certain whether or not it prevents scrying - the description isn't 100% on that - but it might, depending on how pbo interprets the spell. We know Gorham is very good at divination magic, so taking whatever steps we can is good to at least air our thoughts.

But we can assume Gorham is going to be well aware of wherever we go next once the decision is made since we cant be scryproof all the time.

Domarc bought Gorham's assertion on having possession of the Sphere pretty strongly, though the fact that it hasn't been used yet seems at odds to that. But if he doesn't have it, us going after it would lead him there. Based on the encounter with one of his followers that we just had, I feel that going after Gorham directly is likely a fools errand; if he has beings as powerful as that "priest"...well, I don't want to deal with him directly just yet. Best case scenario in going after him is that we are able to disrupt his plans enough to slow things down; but he'll know we're coming.

Concur with going to Solyhill.

I may be thick as a brick, but as long as it doesn't end up a real bungle in the jungle, Mordred is ready to pay the Gethro toll.

There is little to be done for the villagers of Alband but leave them to grieve for their holy house and the priest they thought they knew. The party departs, heading south a ways before stopping to confer under the protection of a conjured dome of privacy.

Here, the decision is made to return to the crossroads and head west sixteen miles to Solyhill, hopefully there to find Gethro and learn whatever he knows. Mordred acquiesces to the plan, despite his feeling that they yet have unfinished business in Sthombo. Domarc points out that Gethro has kept his word with them so far and may be the only true friend they have left, with Zora in hiding and Martjan's fate uncertain.

The party mounts up and rides toward Solyhill. The heavy gray sky threatens rain but never delivers, and they pass few travelers in either direction. After a few miles the road starts to snake back up to the north, facing the steep, snow-capped ridge of the Lesser Dulehan mountains. The ground is stony and uneven here, the trees sparse and bent. Sheep and goats graze the low hills, but the settlements are spaced far apart and set well back from the road.

As evening falls, the party can see Solyhill in the distance, silhouetted against the remaining light of the sunset: a sprawling rise of elevated land with a rustic hill-fort crowning it, a scattering of buildings below comprising the small town that bears its name.

If the stories are true, nearly four hundred soldiers who had been stationed here lost their lives as a direct result of the Six-Pronged Crown's intrigues, all taken in a single day.

Soon enough, you will close the distance that has thus far kept you from fully apprehending this tragedy in which you were involved.

This concludes Chapter Six of The Secret History of Bload. All player characters should advance their characters to the seventh experience level.
64 of 64
<< First < 62 63 64